Category Archives: The Portrait of a Lady

Thanks for not being my dad.

You see, he’s pretty awesome.  And you guys, well, let’s just say that you’re best left where you are:  inside the covers of a book. 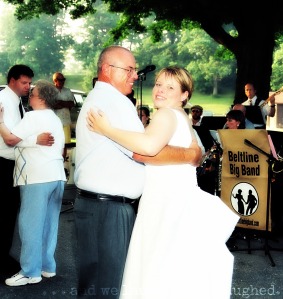 The House of Mirth chapter 2

She accordingly installed herself in the Madison Avenue house, and Percy, whose sense of duty was not inferior to his mother’s, spent all his week days in the handsome Broad Street office where a batch of pale men on small salaries had grown grey in the management of the Gryce estate, and where he was initiated with becoming reverence into every detail of the art of accumulation.

Just think if we could have gotten Americana collector Percy Gryce from The House of Mirth to go antiquing with art collectors Gilbert Osmond and Edward Rosier from The Portrait of a Lady.  They could have been BFFs.

Posted by Christine on May 8, 2013 in The House of Mirth, The Portrait of a Lady

The Fastest 300 Years EVER!

Sancho and the donkey.  Christian.  Yahoos and Houyhnhnms.  Elizabeth and Darcy.  Oliver.   Bertha-in-the-attic.  Hester and Pearl.   Moby Dick.   Uncles and Madams.  Rascal.   Anna-Kitty-Levin-Vronsky-oviches.   The Heath.   Isabel.   Huckleberry.   The Journeys of Henry and Marlowe.   And now Lily, whose outcome, at least for me, is still uncertain.

While paging through the Well-Educated Mind list of fiction books, I realized that Don Quixote was published in 1605 and House of Mirth in 1905.   300 years!  I congratulate myself and you, fellow readers, on plowing through 300 years of literature.   May the crop be plentiful!  I suggest a glass of red wine and some good chocolate to celebrate.

Posted by Jeannette on May 7, 2013 in Anna Karenina, Crime and Punishment, Don Quixote, Gulliver's Travels, Heart of Darkness, Jane Eyre, Madame Bovary, Moby-Dick, Oliver Twist, Pilgrim's Progress, Pride and Prejudice, The Adventures of Huckleberry Finn, The House of Mirth, The Portrait of a Lady, The Red Badge of Courage, The Return of the Native, The Scarlet Letter, Uncle Tom's Cabin, Well-Educated Mind 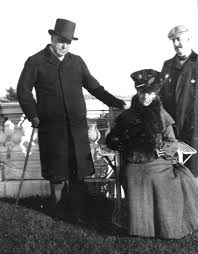 I’ve been known to play matchmaker a time or two in my life.  Not always successfully I’ll admit, well, rarely successfully might be more like it, and while I’ve sworn off the practice in real life, I’m not afraid to set up a fictional friend or two.

So when we learn in Chapter 3 that Lily’s preference in the husband category “would have been for an English nobleman with political ambitions and vast estates” I wanted to sit down an pen a missive to our dear Lord Warburton suggesting a blind date.  It would be a match made in literature.

Here’s the oddly fitting part, Edith Wharton and Henry James were good friends. So was Mrs. Wharton giving a little nod to her buddy’s characters?  I don’t know, but if Lily can’t get things to work out with any of these dudes we’ve met so far, I hope she hops the pond and looks up one of Isabel’s rejected.

Posted by Christina Joy on April 23, 2013 in The House of Mirth, The Portrait of a Lady

Another blogiversary, another year of reading bliss. 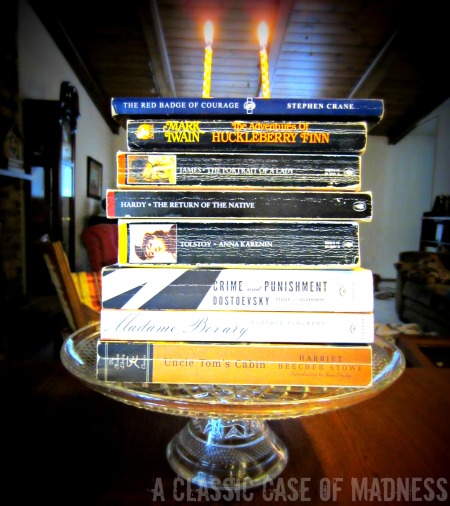 So who did you love and cherish most this past year?

Posted by Christina Joy on March 24, 2013 in Anna Karenina, Crime and Punishment, Madame Bovary, The Adventures of Huckleberry Finn, The Blog, The Portrait of a Lady, The Red Badge of Courage, The Return of the Native, Uncle Tom's Cabin

Have you taken the The Portrait of a Lady quiz?  If you do, and get the answer to the first question right please explain in the comments.  I take issue with that one, but I’m not here today to complain (again) about the fairness and accuracy of the sparknotes quizzes.

I want to talk about a “What if . . . ” idea that they gave me.  Here’s the question that spurred my thought:

Where does Pansy Osmond attend school?

I don’t think I’m giving away to much by telling you that the answer isn’t B.  But what if it had been?

In case we haven’t explained this before, all three of us (not to mention all three of our husbands) have been Lutheran school teachers.  And although we all taught in the good ol’ US of A, to some extent all Lutheran schools are just an extension of Germany.

Well, the fourth commandment would have told her to honor her father (and mother.)  So, that might not have impacted her respect for her father, but would she be so strictly obedient to his every wish and command?  It’s hard to say, but I believe she is reacting in fear toward him, and I’d like to think that the love of her Heavenly Father and forgiveness through his son would have curbed that paralyzing reaction to his demands.

I think James paints an accurate picture of the sisters in the convent loving Pansy and certainly doing their best within their means to provide her with the education for which they have been trusted.  But the poor child, who should actually be an adult, is imprisoned in a life without an understanding of familial love, independence, and a proper understanding of how to love her neighbor.

It’s silly to think a Lutheran education would solve her every problem.  It wouldn’t.  There are no panaceas.  But, I can pretty much guarantee this much:  No Lutheran School I know would ever take back a 20 year-old student just because their Daddy didn’t approve of their choice of husbands.

Posted by Christina Joy on February 24, 2013 in The Portrait of a Lady

Not Lying Down on the Job

As we’ve discussed earlier, James isn’t a big fan of dropping his character’s names into every paragraph, or even page.  Sometimes it seems he’s set himself a one-use-per-chapter rule.  And while that can be mildly annoying/confusing it does allow for some entertainingly descriptive moments.

It was in virtue of this principle that he [Osmond] gave himself the entertainment of taking a fancy to a perpendicular Bostonian whom he had been depended upon to treat with coldness.

I plan to use this helpful adjective next time I’m asked to describe someone.  You know, when asked who it was at church that we prayed for because he fell and broke his arm I’ll reply, “Oh, that formerly perpendicular man that sits on the front right side.”

Posted by Christina Joy on February 22, 2013 in The Portrait of a Lady

← Older posts
A Classic Case of Madness
Blog at WordPress.com.