Did you Seize the Day?

I’m seizing this hebdomadal check-in and turning it into a quick wrap-up.

I found Bellow’s brief novel to be a combination of Mrs Dalloway and The House of Mirth: a day in the life of a midlife crisis.

I was also reminded of our “city-bad, country-good” theme.  How many examples of that can we find in the WEM novel list?  I’ll start with Oliver Twist. Feel free to name others.

What did you think of our hippo-like main character?  Did you feel sympathy for him?

Oh, and what did you think of Dr. Adler?  Were his harsh actions toward his son justified?

One cannot read the phrase Seize the Day without thinking of its Latin counterpart:
Carpe Diem.  Did you ever wonder about the phrase’s popularity?  Where does it come from?  Do what I did.  Pick up your trusty copy of The Well-Educated Mind and read page 360.  The poet Horace includes the words Carpe Diem in Odes.  SWB paraphrases Horace’s philosophy: “Accept your mortality and always act in the knowledge that time is short.”

Based on the short time we spent with Tommy Wilhelm, do you believe things will improve for him?  Is the ending of Seize the Day hopeful? 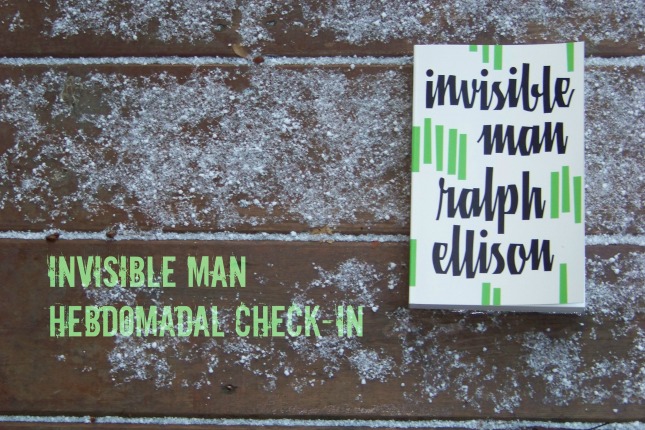 In chapter thirteen the narrator witnesses an eviction.  Distraught over what he sees, the narrator begins a spontaneous speech.  Does this speech have a point?  What does he hope to accomplish?  Is it a bunch of craziness?

Even if I had trouble following his line of thought, the crowd didn’t and his words moved them to action.  What did you think about the “Eviction Speech”?
Please share your thoughts and your place in the comments.

Posted by Christine on January 13, 2014 in Invisible Man

Remembering how to Check-in

Just like my children, I’m resisting getting back into a regular routine.
There’s been lots of whining.
On my part.

I like vacation.  I like eating too much.  Taking too many naps.  Laughing with family and friends.  Snuggling under blankets when it’s cold and snowy outside.

Over the break I even read a book or two for fun.  for FUN!
Of course that was only after I finished Invisible Man.
So tell me, did you finish Ellison’s book?
Would you call it a classic?
Did you read anything else over the break?
Please share in the comments.

Posted by Christine on January 6, 2014 in Invisible Man

I was reminded of Native Son‘s Bigger Thomas in chapter seven.  In chapter nine of Invisible Man, a friend from the past pops up in the text.  Two friends, actually: Jim and Huck Finn.  In case your holiday reading has slowed down (like mine), I won’t explain what Twain’s characters are doing in Ellison’s book.  I’ll just ask if you’ve run into any other classic character cameos in your reading.  Please share the cameos and your place in the comments.

Posted by Christine on December 23, 2013 in Invisible Man

It’s check-in time.  Where are you in Invisible Man?  After finishing chapter fifteen, I realized that  Ellison writes great chapter endings.  Check it out.

chapter 1:  (It was a dream I was to remember and dream again for many years after.  But at that time I had no insight into its meaning.  First I had to attend college.)

chapter 2: I stepped on the gas, wondering where I could get some whisky.  Not in the town, that would take too long.  There was only one place, the Golden Day
“I’ll have you some in a few minutes, sir.”  I said.
“As soon as you can,” he said.

chapter 3: He was silent as I drove away.

chapter 4: I left somewhat reassured, but not completely,  I still had to face Dr. Bledsoe.  And I had to attend chapel.

chapter 5:  I stood in the darkened doorway trying to probe my future if I were expelled.  Where would I go,what would I do?  How could I ever return home?

chapter 6: I grabbed my bags and hurried for the bus.

chapter 7: I reached Men’s House in a sweat, registered, and went immediately to my room.  I would have to take Harlem a little at a time.

chapter 8: Something was certain to happen tomorrow.  And it did.  I received a letter from Mr. Emerson.

chapter 9: I could hardly get to sleep for dreaming of revenge.

The author does a great job leading the reader into the next chapter.  I could almost use the ending sentences as chapter summaries.  Pretty nifty.

Summarize your feelings about the novel so far and while you’re at it, please leave your place in the comments.

Posted by Christine on December 16, 2013 in Invisible Man

I’m just shy of being half-way through Invisible Man.  From the start I’ve been reminded of Native Son.  Both books start out fast-paced, full of shock and horror.  Like Wright, it seems Ellison is out to grab our attention.  Jeannette has forewarned me that soon things are going to slow down and take a turn to the depressing–or at least depressed on the part of the Narrator.

Where are you in Invisible Man?
Are you shocked but still speeding along, or have you delayed due despondency?

Please leave your place in the comments.

Posted by Christine on December 9, 2013 in Invisible Man

Have you started Invisible Man by Ralph Ellison?

What are your thoughts so far?

Do you have any novel ideas?
Get it?  Novel Ideas?
Novel as in book and novel as in new?!

Oh, you can tell that it’s the Monday after Thanksgiving…
Forgive my pun and share your place in the comments.

Posted by Christine on December 2, 2013 in Invisible Man

I finished Part III of 1984 this weekend.  I think I need to make more doctor’s appointments for my children.  Waiting rooms are where I’m most productive with WEM reading.  How many of you went ahead and read Orwell’s Appendix?  I’m tempted to skip it but don’t want the WEM Thought Police to come after me.  Help me decide?

How is your reading of 1984 coming?  I’m stuck in the Brotherhood Book section.  I think I’ve been at the end of Book II for about a week.  Doublebored.

But, I did find this idea of Winston’s interesting:

The best books, he perceived, are those that tell you what you know already.

I’m near the end of Book 2.  We’d better read quickly before the Ministry of Truth finds out and changes the text of Orwell’s classic book.  You know, in Winston’s world there is no truth.  What we read today maybe changed tomorrow.