Classical Usage:  Mr. Rochester is having one of his illusive conversations with Jane.  He’s hinting, dropping ambiguous lines of truth into overstated overtures, and making intriguing statements about his own, and her, character.  Those conversations where you first get to know someone, first fall in love with them, and yet know little of their history are so important because each sentence can reveal decades of insight.  This is one of the many nuggets from his past Mr. Rochester gave Jane to examine, “When fate wronged me, I had not he wisdom to remain cool:  I turned desperate; then I degenerated.  Now, when any vicious simpleton excites my disgust by his paltry ribaldry, I cannot flatter myself that I am better than he:  I am forced to confess that he and I are on a level.”

Classically Mad Usage:  Here at the Blog we try to refrain from all forms of ribaldry.  The same cannot be said for Cervantes and Swift.  I’m sure glad we passed that potty-mouthed phase of classic literature, and now I have a word to describe it that sounds much more respectable.

Look what I found. 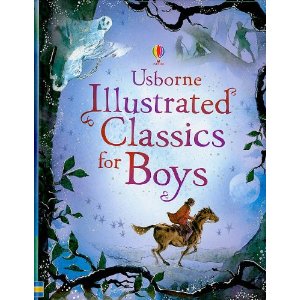 No, it’s not the next title in the WEM list.  It’s a collection of classic stories Usborne has illustrated for children.  Check out the titles:

and wait for it…

See why I had to immediately put a library hold on this book?!

This version of Part 1 of Gulliver’s Travels was retold by Gill Harvey and illustrated by Peter Dennis. 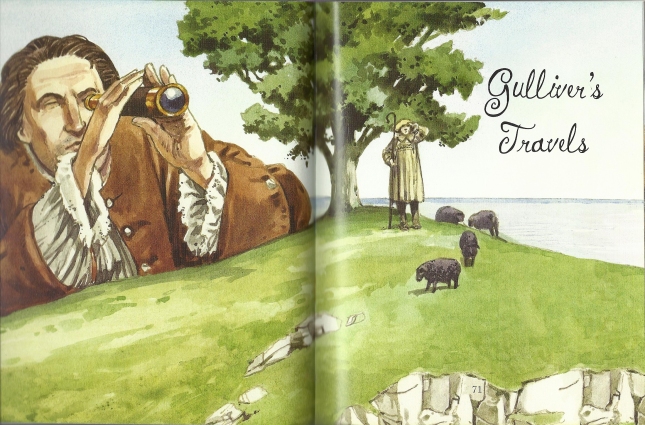 Although some adaptations have been made, I think the story truer to Swift’s original than the pop-up book. 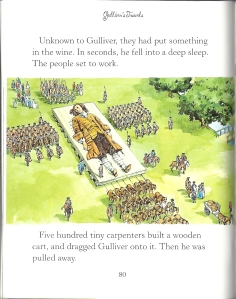 Gulliver is transported on a wooden cart to the capital city. 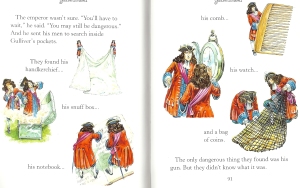 The nobles compete in the game of "Leaping and Creeping".

There are pages devoted to egg debate.  Of course Gulliver steals the naval vessals from the people of Blefescu.  There’s even an illustration of the fire that Gulliver puts out. 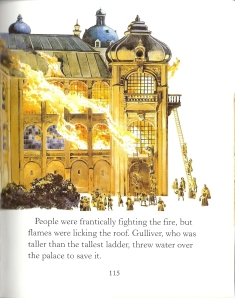 This version has Gulliver throwing “water over the palace to save it.”  That’s a small change I prefer.  One detail the storyteller did not change is how the nobles want to kill Gulliver or at least blind him at the end of Part 1.  Don’t worry.  Just like in Swift’s version, Gulliver escapes in a boat and is rescued by people his own size.
I like the Usborne version of Gulliver’s Travels, and I can’t wait until the library informs me that my next hold is ready for pickup.

Posted by Christine on December 19, 2011 in Gulliver's Travels

There’s so much humor in Swift.  Tons. Yet here I am, barely posting, and now when I do finally get around to a post it’s going to be about as humorless as possible.  Really dark.  Dark, dark, dark.  Brace yourselves.

When Gulliver visits the Island of Luggnagg he discovers that some of it’s natives, the Struldbrugs, are born immortal.  After waxing eloquent about what a joy he believes it must be to know that you will never die he is confronted with the grim reality that although these people never die they do age and decay just as mortals, yet without the release of death.

Swift, whether intentionally or not, illustrated hell here in a way that even Bunyan could covet.  It is the presence of death in our world that causes sickness, memory loss, and our failing senses.  And so while Swift says that these people didn’t have a death, what they really had was death everlasting.  They had hell.  Yet for believers death is the portal to life everlasting.

And that, my friends, is satire.

Posted by Christina Joy on September 23, 2011 in Gulliver's Travels

To Know or Not to Know

My copy of Gulliver’s Travels is bare bones.  No intro.  No preface.  No Editor’s notes.  No footnotes.  No endnotes.  No sidenotes.  No index.  No nothing.

I suppose that’s all well and good.  SWB doesn’t want us delving into a lot of analysis before we read these classics for the first time anyway.

GT is a satire and I know not the first thing about 18th century British Politics.  So that makes me asks the following question:

Should I be constantly checking with my husband and his Norton Critical Edition for Swift’s meaning, or should I be content to apply the satirical elements to human nature and times and places that I see fit?

Ruminate on this, dear friends.  Ruminate.